The Diagnosis and Management of Feline Ureteral Obstruction 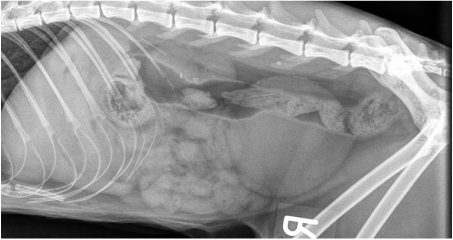 Abdominal x-ray of a cat with renoliths (stones in the kidney) and a ureterolith (stone in the ureter).

​​Ureteral diseases are being increasingly recognised in our feline patients, mainly due to improvements in diagnostic imaging techniques. In addition to this, developments in interventional techniques have resulted in a number of new management options.

A number of ureteral pathologies are reported in cats:
The sequel to the majority of these conditions is ureteral obstruction (either partial or complete), which leads to reduced glomerular filtration in the associated kidney. Ureterolithiasis is the cause in at least 90% of cats presented for obstruction, the vast majority of which will be calcium oxalate.

Obstruction of the ureter leads to a rapid increase in ureteral pressure, which is transferred to the renal pelvis, this leads to a reduction in renal blood flow. The outcome of this is a rapid reduction in glomerular filtration rate, by about 50% within 4 hours and by 96% at 24 hours. A compensatory increase in glomerular filtration is seen in the contralateral kidney, assuming it is not also obstructed.

Signalment:History:Clinicopathological findings:Diagnostic Imaging:
None of these modalities reliably predicts the long-term outcome after ureteral obstruction, meaning that there is an element of uncertainty to any treatment decisions. 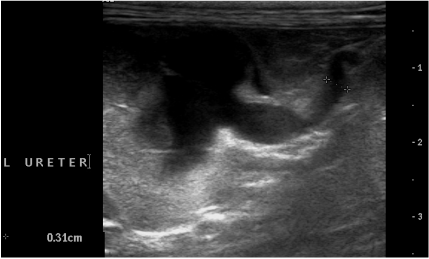 Medical management should be initiated immediately after diagnosis of a ureteral obstruction, in order to stabilise the patient and attempt to relieve the obstruction. It should, however, be noted that it is only reported to be successful in 17% of cats with obstruction.


Medical management:
If no response is seen to medical management over 24 hours then it is unlikely to be successful. In that event a more definitive treatment should be undertaken as soon as possible, options for this include:

Interventional procedures are therefore currently considered the treatment of choice for ureteral obstruction in cats and are successful in around 95% of cases. Whilst both ureteral stenting and SUB placement are successful in the majority of cases, the current evidence suggests that stent placement may have a higher incidence of long-term complications (primarily lower urinary tract signs) and so SUB placement is preferred.

I have now placed SUBs in a number of cats and agree that the incidence of longer-term complication seems to be lower. However it does require a big commitment from the owner as frequent visits to us are required to monitor the device for the rest of the cat's life.

​If you are interested in seeing how SUBs are placed then have a look at the video from Norfolk Vet Products (makers of the SUB) at the bottom of the page.

This is dependent on the cause of obstruction and the renal function after treatment. The majority of cats will require management of chronic kidney disease longer term and, potentially, management to reduce the likelihood of stones reforming.

Cats with stents or SUBs also require regular follow-up to ensure the device continues to work as expected. The median reported survival time in cats after interventional management is 498 days (2->1278) but is dependent on remaining renal function.